Since 2015, a plethora of rainbow-coloured trains have been running across the rails of the United Kingdom. From suburban metro systems to long-distance inter-city operators, a variety of creative designs have brightened people’s lives, whilst also spreading the important message of inclusivity and diversity that Trainbows promote.

We’ll keep this page updated as new Trainbows are unveiled and, if we’ve missed any, we’d love to hear about them – you can get in touch with us here.

The story of the Trainbow starts back in 2015, with the Docklands Light Railway unveiling two of its B92 units in an attractive rainbow livery as part of Transport for London’s ‘Ride With Pride’ campaign. The DLR units were complemented by a New Routemaster bus and London Taxi in similar designs, running through the 2015 Pride season. The designs were created in conjunction with Transport for London’s LGBTQ+ staff network group Outbound, and were sponsored by Barclays.

In 2016 a second light rail network joined in the multicoloured representation, with an attractive six-stripe design from the UK’s largest tram network, Manchester Metrolink. The clever design adapted the standard Metrolink livery with the addition of multicoloured dots and was applied to two M5000 vehicles for that year’s Manchester Pride celebrations.

The spotlight was firmly in Manchester in 2016, with TransPennine Express also becoming the first heavy rail operator to proudly support the LGBTQ+ movement. The eye-catching pink livery, with golden starburst design, was applied to both ends of Desiro unit 185 104, operating across TransPennine’s Manchester routes throughout September that year.

The Trambows returned in 2017, with two more M5000s wrapped in the same rainbow spots as the previous year. The units once again ran throughout Manchester Pride month, bringing a splash of colour to the UK’s second city.

Two years after Pride trains first arrived on the rail scene, the first ‘Trainbow’ was unleashed: Virgin East Coast’s class 91 locomotive 91 103. The vehicle carried a muted rainbow hearts design over its Virgin livery, conveying a ‘Love is Love’ message. The train was launched ahead of 2018’s York Pride, with VTEC also supporting the Campaign Against Living Miserably, or CALM.

Nobody can deny that Great Western Railway’s IET, 800 008, was ground-breaking. The first ‘true’ Trainbow, its six stripes are cleverly worked into the standard livery, replacing a matte green diagonal band with the rainbow colours. In 2020, the train was named ‘Alan Turing’ after the famous Bletchley Park code-breaker, with Turing’s struggles being recognised as part of the operator’s ‘Great Westerners’ programme.

2018 was undoubtedly ‘the Year of the Trainbow’, with no less than nine different rail operators adding rainbow designs to their trains. ScotRail, the operator of all railway services in Scotland, gave their Saltire logo a rainbow makeover, and applied the result to three of their Turbostar units in June. The trains operated all over Scotland, and remained in place for several months.

London Northwestern Railway’s first Trainbow design appeared in July 2018, with a small rainbow patch added to the front of Desiro unit 350 373. The operator had taken over commuter services on the West Coast Mainline the previous December, making the year’s Pride month the perfect opportunity to debut a rainbow design on the new livery.

Transport for London returned to the Trainbow stakes in 2018, with a new addition to London Overground class 378 unit 378 216. The design was part of that year’s Pride campaign, again led by TfL’s LGBTQ+ staff network group Outbound, featuring the slogan #EveryLoveMatters in the six-stripe Pride and pink, white and blue trans flag designs. The train was complemented by a number of roundels also in the rainbow and Trans Pride colours across the TfL network.

Travelling at up to 140mph, Southeastern’s 395 012 is the fastest Trainbow in the land, operating across the High Speed network every day. Launched at St. Pancras International in July 2018, the curved rainbow design complements the shape of the train, and also conveys the notion of speed that comes with the High Speed routes.

Not wanting to be outdone by their East Coast colleagues, Virgin Trains – the then-holder of the West Coast franchise – unveiled their first and only Trainbow in late July 2018. Sporting the ‘#RideWithPride’ slogan previously used by Transport for London, the train wore an attractive take on the company’s new ‘Flowing Silk’ livery, with each driving car carrying the bright colours of the Pride flag.

For Brighton Pride in 2018, train operator Southern adorned eleven of its Electrostar units with a rainbow version of their iconic logo. Created by design apprentice Mags Luckhurst, the units saw use across all of Southern’s routes, and as of February 2021 there’s still at least one out and about in the wild…

You knew this one was coming, didn’t you? Manchester Metrolink returned to the multi-coloured crew for Manchester Pride in August 2018. Featuring an all new design with the six rainbow stripes now running horizontally across the two M5000 units, the trams continued to turn heads – and fly the flag for diversity and inclusion for the entirety of the light rail industry.

Rounding off the Trainbows of 2018 was a late entry from East Coast operator LNER, following their takeover of the East Coast services that June. The ‘#LoveIsLove’ design built on the brand grown by the original class 91 Trainbow four months previously, with a bolder rainbow design now covering part of the LNER logo.

First out of the blocks in 2019’s efforts was London Northwestern Railway, with a second version on their class 350 Desiro unit number 350 375. Taking design cues from the diagonal lines of the GWR design, the six stripes brought a splash of colour to the West Coast Mainline.

Brighton Pride was marked in style in 2019, with perhaps the boldest and most creative Trainbow to date being launched courtesy of operator Thameslink. Again designed by GTR apprentice, and friend of Progress, Mags Luckhurst, the design takes the white of the class 700 units as a blank canvas. spreading a message of love and inclusivity with the rainbow heart whilst also taking design cues from transport maps. We’ll level with you: we’re a big fan.

Trainbow: Heavy Freight edition. Railfreight operator GBRf broke new ground in 2019 when it added a rainbow-variation of its livery to locomotive 66 773 and named it ‘Pride of GB Railfreight’. The first – and to date only – non-passenger carrying Trainbow, the locomotive can be seen all over the country on a variety of different workings and proving that diversity and inclusion are important parts of every aspect of the railway network.

Another first for 2019 was South Western Railway joining the ranks, with a photo-realistic rainbow flag design added to each end of Desiro unit 444 019. At the time, the train still wore the livery of former operator South West Trains, and the rainbow was a convenient way to cover up a previous element, whilst still blending in and creating a unique design.

Details are thin on the ground about Chiltern Railway’s 2019 Pride train. We only learnt about it whilst running our #Trainbow21 competition, and photographs are scarce. From what we’ve learnt, Turbo unit 165 037 was kitted out with a set of rainbow hearts on the doors, spreading a message of love throughout Pride season.

Six stripes? How 2018. Manchester Metrolink returned for the fourth year in a row with yet another brand new design on two of their M5000 trams. Recognising that the Pride movement continues to change and evolve, for the first time 8 stripes were seen on the rails, with the so-called Philadelphia Pride flag, with additional black and brown stripes to represent that there is still more to be done for Black and Indigenous People of Colour (BIPoC) within the Pride community. Sadly, the Covid-19 pandemic broke this streak for 2020, but we hope to see a return in Manchester before too long.

South Western Railway’s class 444 unit 444 019 was unveiled in this attractive six-stripe rainbow design in 2020, replacing the temporary design unveiled a year earlier. Now incorporating a flatter rainbow on the company’s new livery, the train can be seen across South Western Railway’s longer distance routes. It also holds the accolade of being the first Trainbow to be tracked in real time, as part of Realtime Trains’ ‘Know Your Train’ functionality.

If you’re reading this Avanti West Coast’s 390 119 should need no introduction at all. Progress, as it was so-named following our successful social media campaign, is the biggest and boldest Trainbow design ever, with a full eleven carriage Pendolino wrapped from head-to-toe in the colours of Pride. It’s not just a six stripe, or an eight stripe flag either: it uses the colours of the ‘Progress’ flag to create the powerful flagship, with the pink, blue and white of the Trans Pride flag added to the Philadelphia Pride flag in recognition that more work still needs to be done. Avanti also launched a new campaign, #LiveProud, to work towards new levels of acceptance not just within the railway industry, but across society too.

Some would say that the presence of a global pandemic is a justifiable reason to pass on creating a new Trainbow for Pride 2021: but not Scotland’s train operator ScotRail. Upping the bar from their 2018 edition, the operator unveiled a brand new design – based around the Progress flag – on a class 334 unit on 22 June. What’s more, the livery will be remaining in place until at least 2029 – a new challenger for the longest-lived Trainbow has entered…

2021 is, without a doubt, the Year of Progress. Following hot on the heels of ScotRail’s Progress liveried train is another returnee: Manchester Metrolink. No stranger to the Trambow, Metrolink unveiled their fourth unique design ahead of Manchester Pride in mid-August, featuring the full colours of the Progress flag for the very first time. As usual, the design is inspired by the usual spotty livery of the M5000 tram fleet, creating a vibrant and attractive scene on the streets of Manchester. We’re very big fans here at Progress HQ! 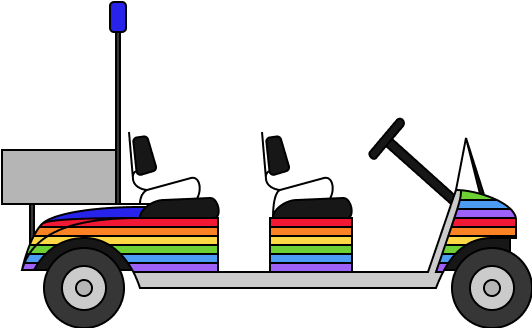 We couldn’t run through the history of the Trainbow without giving a special shoutout to the Buggybow! These plucky upstarts can be found at Euston and Paddington stations, giving a helping hand to anyone who needs a ride from concourse to train (and back again!). It’s a great initiative by Network Rail and another wonderful way of bringing more inclusivity to the rails. Now then… can we have a go…?

It might not be a train, but the Tiny Football Car captured the hearts of a nation during the UEFA Euro 2020 competition. Delivering footballs to the centre circle, the car was part of a sponsorship deal with manufacturer Volkswagen. For the final, seeing England up against Italy at Wembley Stadium, the car was decked out in the rainbow stripes.

We Stan the Tiny Car. ❤️

Okay, it’s not a true Trainbow – but it’s got a special place in our hearts. Former Greater Anglia franchise holder National Express branded their services as ‘one’ between April 2004 and February 2008. The stylish livery, complete with rainbow stripes, appeared across a huge range of rolling stock, quickly becoming one of the most recognisable brands on the railway. Despite no formal connection to any Pride campaigns, railway media at the time did make comparisons to the movement, with the livery also becoming known as ‘Refreshers’ after the confectionary of the same name. To date, it’s the closest the region has come to having a Trainbow of its own – hopefully it won’t be too much longer before one appears!